We’ve highlighted epic quits before and well we’d argue none are nearly as viral as this former Amazon delivery driver who walked off the job mid-route abandoning the vehicle with packages and the keys in the ignition of the vehicle in Southfield, Michigan. How epic was the quit? Well so epic that story left Detroit, starting with The Detroit News made a full story about it. Fox 2 Detroit, WXYZ, local radio stations in Detroit even got in on the action. Then national coverage on CNN, even Google News. 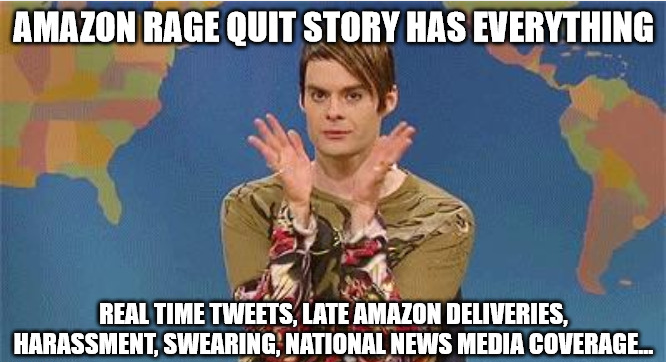 The local Fox station also had a story which we’ve embedded below.

If you are sensitive to vulgar language then we suggest watching the local TV video above and then move along, because there is plenty of adult language ahead. We want to give it the raw uncut timeline of how this went down.

Let’s take a Twitter Journey if you will through Derick Lancaster’s day of his epic rage quit compliments of his Twitter.

The the very fateful day of June 29, 2020 about 2:50 PM Derick Lancaster, who goes by @_lilderick on Twitter tweets that he has abandoned his Amazon delivery van at a local gas station in Southfield, Michigan.

He then tweets that he has a lyft driver picking him up. 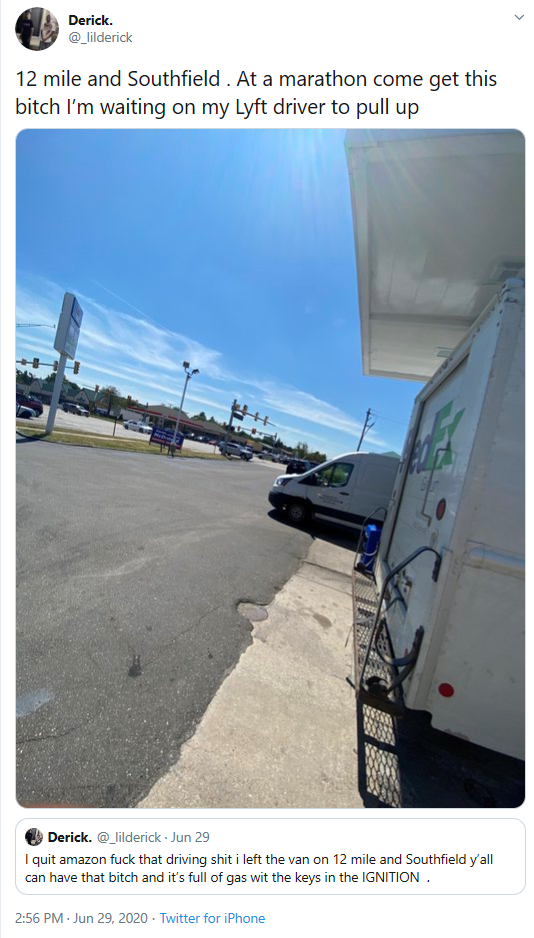 Other Twitter users are quick to chime in that they have in fact spotted the van parked. 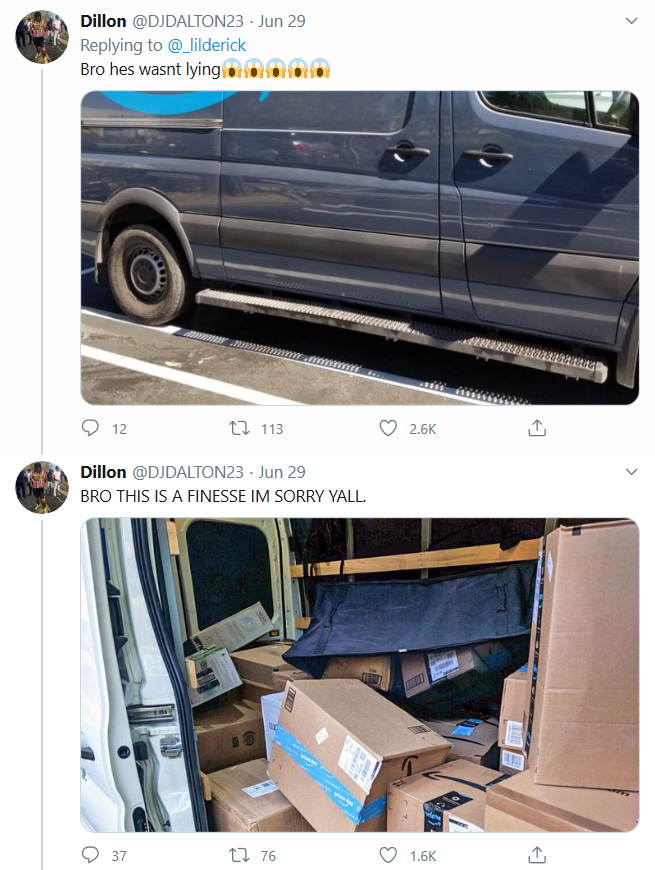 Another user tweets they saw the Amazon delivery van. 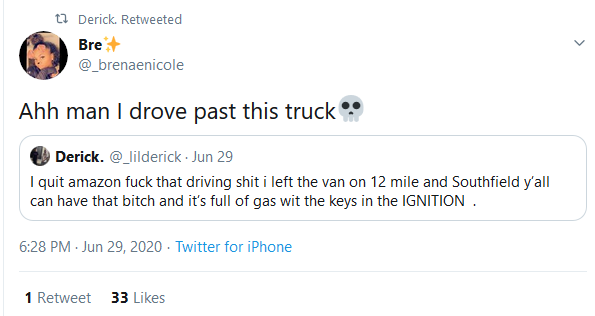 By 5:21 PM Amazon customers started to show their new package delivery status messages on Twitter giving their sarcastic “thank you” to the now unemployed driver. 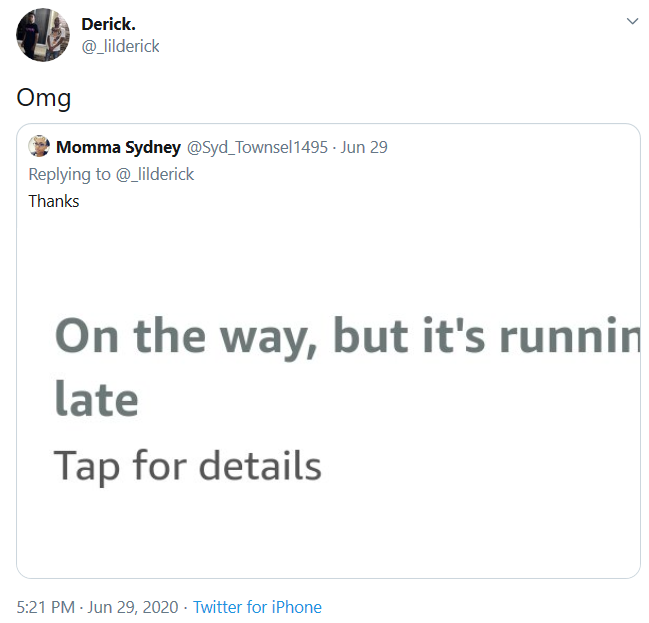 By 6:40 PM Apparently someone from Amazon corporate tracked the twitter account down, and found the phone number for their now former employee and asked to confirm the Twitter account and former driver are one in the same person.

The call was jarring enough that he reflects on it some more.

Reality further sets in, as if the infamous Seinfeld episode titled The Revenge where George Costanza quits but then walks in to work the next day like nothing happened is not going to in fact work in this moment, either.

Further confirming what happened on the call with an Amazon representative. 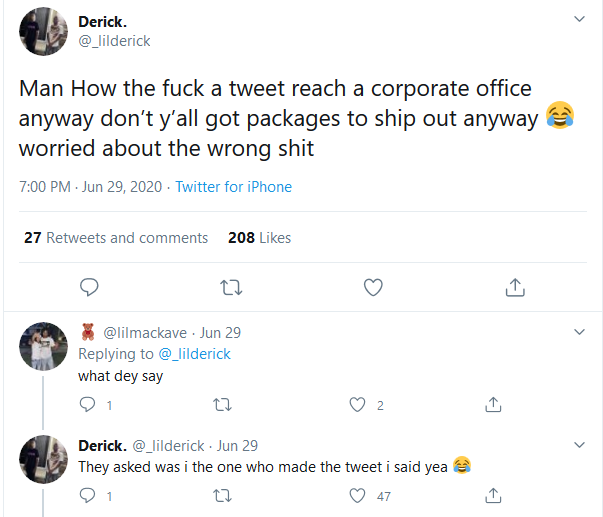 Then the dark side of social media, and peoples desires to have prompt package deliveries started to harass via direct messages. 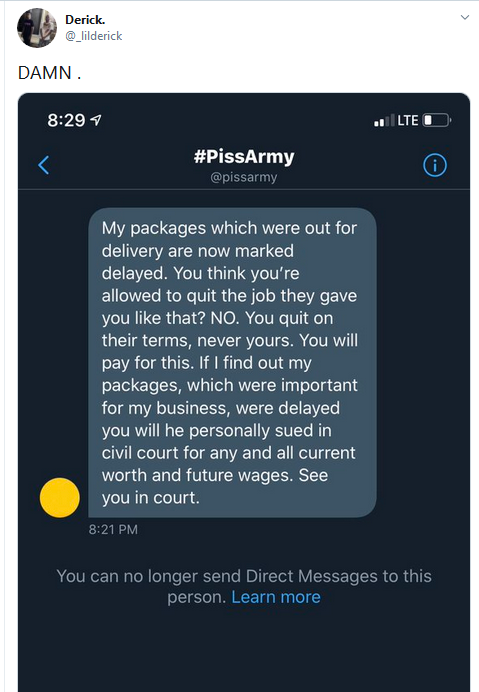 Ten minutes or so later he live streams a rambling manifest of sorts. 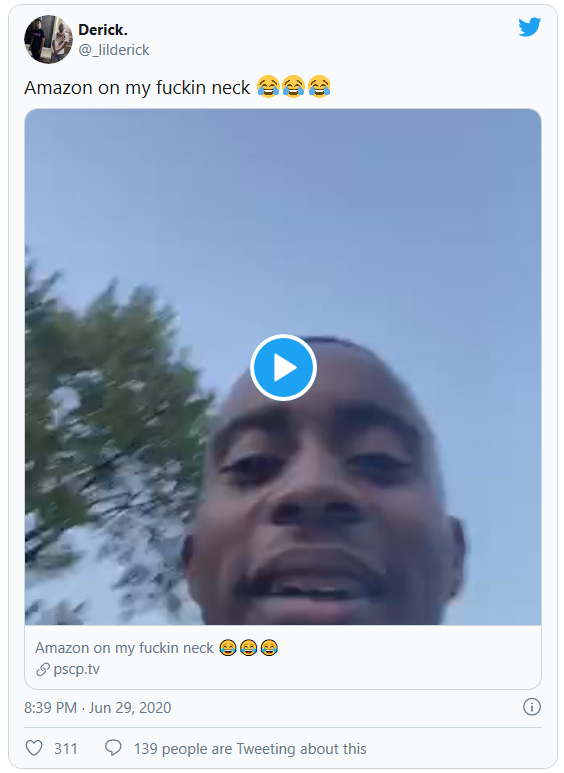 If it is still up below is the embedded post of the manifesto of sorts which is 13 minutes long rambling and vulgar.

At 9:21 PM we figure about the time Derick is used to finishing up his route he returns to presumably collect his personal vehicle. Reflecting back to a Snapchat session he had he tells everyone that they should have seen it coming.

Early in the morning or late that evening probably still digesting the prior days epic quit heard around the world Derick tweets his thoughts going through managements mind.

June 30, 2020 Derick has reality hit him. Quite frankly as it would anyone who just quit their job, however Derick wasn’t like everyone else, his phone was by all definitions probably blowing up from his new social media popularity.

Reaction from the Media 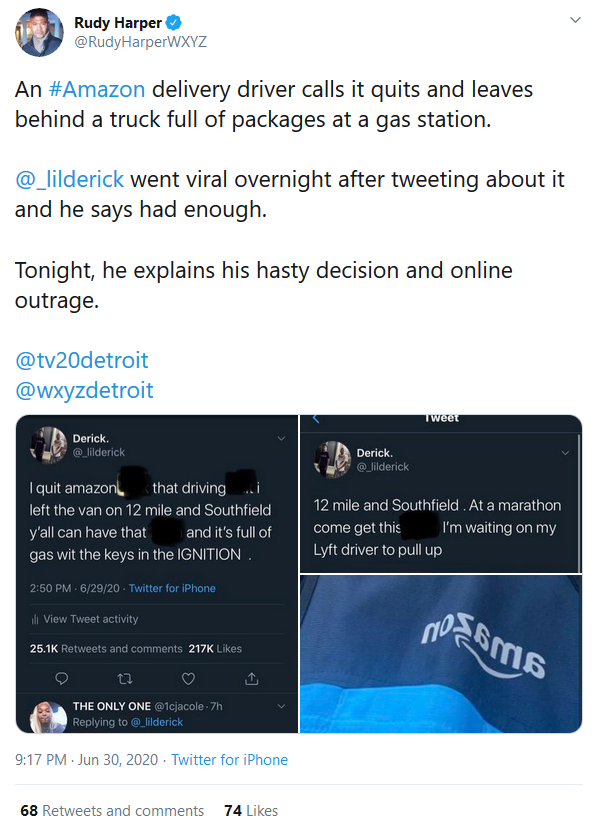 We’ve seen or heard nothing more in the news or from Dericks Twitter account regarding what “actions” it could pursue. Time will certainly tell if there is another shoe to drop in this story, but we would guess any additional actions by Amazon would not be great publicity.

He even made it on CNN.

It is interesting to note that after a very epic quit like this others tend to come out of the woodwork about their issues with the same location.

this is funny bc I worked at the hazel park location last summer and I walked right out of that btc too 💀 I was throwing up from heat exhaustion and my manager said “eat a popsicle and get back to work” and I walked my ass right on out of there 💀 https://t.co/AOOEb9FPtU

Days after this entire event unfolded the former employee is still getting harassed on social media. Let the guy move on, we suspect most of these harassers couldn’t even pull off one shift as an Amazon delivery driver without quitting in tears. This is likely the last on topic we’ll see or hear from Derick. He realizes that he has to go collect his last check in person.

The paper last check is often standard policy even if you happen to have direct deposit, which just makes collecting that check all the more awkward, unless you have the swagger of Derick, newly minted urban legend.

Me walking in Amazon to casually grab my check as if i didn’t leave that van on 12&Southfield went on the news the next day and expose they ass 😂😂 pic.twitter.com/VAIddTYuTN

In summary we’d say every rule that might apply to quitting in a professional sense was broken, but if those rules were not broken would anyone even care? Absolutely not. Would Derick not have become an urban legend? No of course not. From the looks of it, if someone out there was going to be the rage quit from Amazon guy, Derick was the chosen one, and has been wearing it well. Hopefully he is able to get a good respectable job, or start his own venture one day in the future.