In another symptom of poor treatment of workforce a traveler found themselves locked of out their hotel room. Typically not a big deal you head to the front desk and have the hotel staff help you get a new key card made. Unless that loyal staffer had enough and walks off mid-shift.

Soaring to the top of Reddit is a post that has so much searing details that it must be true.

Meet the Career Purgatory story of Milly. Originally posted as “Got locked out of my room went to find the front desk lady and this was on the front counter”

Since starting here, I have stepped up and had your back through many things. I have stepped into positions simply to ensure our guests have a great stay. I have gone above and beyond to accommodate not only our guests, but for you, employees, and the ever-changing schedule. Not only that, I have done it all with a smile on my face.

We’ve spoken numerous times regarding a management position. When I expressed my interest in an AGM position, you told me those weren’t available at the moment, but I was a great candidate for when one did become available. You also told me you wanted me in the Director of Sales position when Jessica left. Because I truly enjoyed my job, I never pushed the issue. I always figured you would tell me more when the time came. On August 13, you emailed me an attachment showing a new manager listed. When I asked you about it, you were cold and short. I asked you about it the next day and you told me “This discussion is over, Milly You’re being ridiculous.” Being HURT, is not being ridiculous, Brian. I have worked my tail off working doubles, coming in on my days off to do social, cleaning rooms, folding laundry, preparing breakfast, all while watching the Front Desk as well… Just for you to offer no explanation as to why a new manager was hired and I wasn’t even considered? Then when I try having that conversation with you, BEING SHUT DOWN? I’ve thought long and hard about why that could possibly be. Perhaps because I don’t wear my uniform? I was always taught to dress for the position I want. Not the one I have. Other than that, I’m stumped. I have gone the extra mile for this hotel and its guests. I have PERSONALLY received many amazing and 5 star reviews on Google. I have cross trained and LEARNED many different positions to keep this hotel afloat. I have put everything into this, and this is what I get in return?

One of our guests once told me “They would never give you a promotion here because you do everything a manager should do in your current position. Why buy the cow when you can have the milk for free?” After having to cancel my flight in order to work due to being short staffed, a friend of mine told me “They’re just going to run you dry until they don’t need you anymore”. Even in a time of need, you’ve still managed to make me feel unvalued in such a short amount of time. I have given a great effort and got a huge slap in the face. I no longer want given this a area or need this for my life. Truthfully, I’ve stayed because of the genuine bond I’ve formed with our guests and because I respected you, Brian. I didn’t want to see you or this hotel fail. However, I stepped up and you let me down. You’ve been quite rude with the discussions I’ve tried having lately. I would be treated better at McDonald’s. 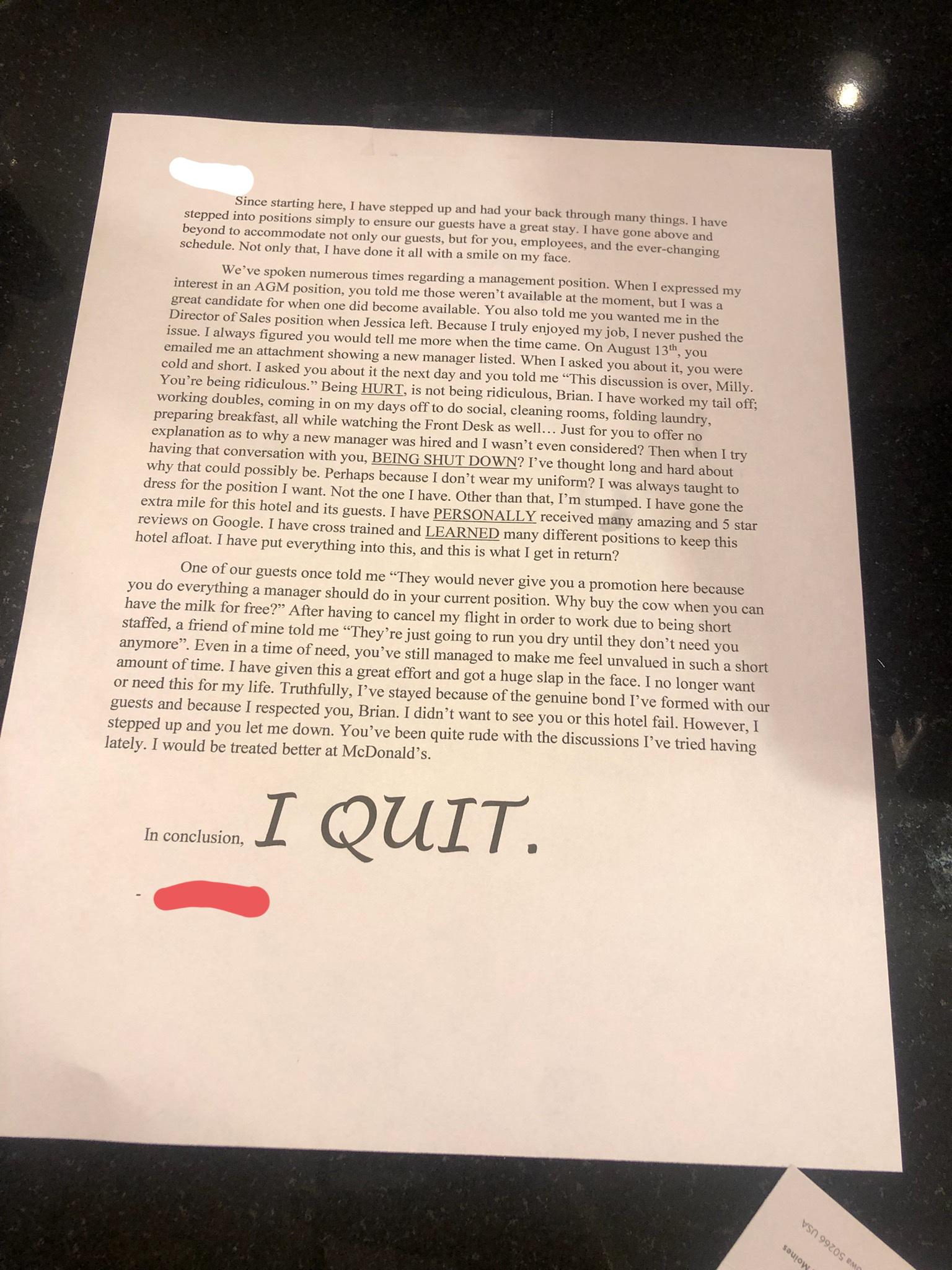