The Bankruptcy Of Blockbuster, Is A Big Deal.

We are witnessing one of the most prolific examples of creative destruction to an industry and the birth of a new one right before our computer screens. Surely many of you have seen the news and the rumors for the past year surrounding the impending and now finally delivered Blockbuster Video bankruptcy that took place on September 23, 2010.  Many websites and bloggers have been salivating at the prospects for about a year.  The video rental industry in the form of a brick and mortar retail establishment is dead.   Blockbuster Video is the latest victim but certainly not the first, in fact Movie Gallery which had bought Hollywood Video just liquidated this year.

Clearly Blockbuster has made some fatal mistakes in the entertainment industry by not embracing streaming rentals in a big way.  What bloggers are missing is that this will have a big impact on the employment picture for the United States.  Blockbuster states in their 2009 Annual report regarding their employees:

It should be noted that this figure of 48,000 employees is down from Blockbuster taking action to cut stores in the past year or so.  In fact the 2008 Blockbuster Annual Shareholder Report states the employee count as this:

So Blockbuster has taken steps to right size in the past year by cutting 22% of its workforce, or over 18,000 employees.

In the latest annual report even the distribution centers that Blockbuster relies on are on the chopping block through outsourcing or other means.

How many employees does Netflix have?

Here is what Netflix has for employees:

“As of December 31, 2009 we had 1883 full time employees.  We also utilize part-time and temporary employees, primarily in our fulfillment operations, to respond to the fluctuating demand for DVD shipments.  As of December 31, 2009, we had 2,197 part time and temporary employees.  Our employees are not covered by a collective bargaining agreement, and we consider our relations with our employees to be good.”

In other words Blockbuster employed nearly 12 times as many employees as Netflix at the beginning of 2010.

Assuming that Blockbuster continues to eliminate stores in favor of outsourced Kiosk rental devices, DVD mail subscription services, and actually creates a streaming network that is competitive with Netflix the company will need to get down to under 5,000 employees. So depending on how you look at it that would result in a net loss of 53,000 jobs since 2008, or  roughly 43,000 jobs since 2010.

To put the potential job loss figure from Blockbuster into perspective, Circuit City had something like 35,000 employees that lost jobs when it was liquidated.  It was also one of the top contributors to the unemployment picture of the Great Recession.  Blockbuster job losses could surpass that job loss figure, I wager even without a liquidation of the company.  Again as we can see Netflix is able to fulfill the demands of the United States for movie rentals and streaming with a paltry 1,883 full time employees, and the company has recently expanded its territory into Canada, another stronghold that Blockbuster used to have under wraps.

A minor footnote in history for those of you who remember, Blockbuster actually looked at purchasing Circuit City before the chain was liquidated.

Now I’m not saying that Blockbuster will be liquidated but it is clear that from 2008’s employee count at 58,000 employees to get on a comparable streaming and mail service level Blockbuster needs to find a way to get down to about 4,000 employees.  Resulting in a net loss for the global economy of 54,000 jobs, much bigger than that of Circuit City.  Granted if you want to compare directly to the United States job picture 32,000 (down from over 40,000 in 2009) employees are in jeopardy in the United States of losing their jobs as of 2010.

It’s obvious at this point that Netflix has been able to do much more with less.  In fact to look at revenue per employee between the companies is kind of embarrassing.

Surely this is no surprise to the general public that a handful of IT administrators and programmers could service many more customers from streaming, and mostly centralised mail centers compared to Blockbuster’s retail store concept.

Another area of strength for Netflix being ambitious enough to focus on streaming is that the worries of US Postal service not taking place on Saturdays are no longer of concern, increased postage fees currently to the tune of $600 million a year, theft and damage of physical discs are also becoming a thing of the past.

For years the complaint against Blockbuster has been their huge late fees, hiring of  debt collectors for late fees, then recently hiding the late fees in exchange for just converting your late return into an automatic inflated purchase of a rental disc which might be scratched up from prior rentals.  Currently a subscription package is on par with Netflix for Blockbuster’s subscription service.  However if you put more stock into being able to stream your TV shows, and movies then Netflix offers the better value, as Blockbuster only offers limited in store trades for mailed DVD’s. 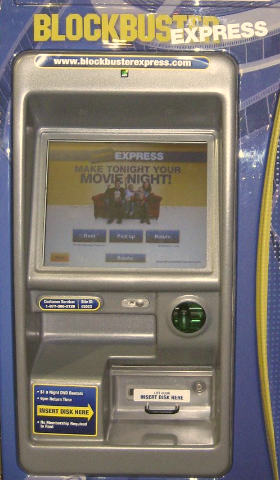 Scarily The Onion put a video out a while back describing how the concept of renting movies is literally a piece of history.
Historic ‘Blockbuster’ Store Offers Glimpse Of How Movies Were Rented In The Past

We’re witnessing probably one of the greatest recent examples of creative destruction to an industry.  Simply put the rental industry as Americans have known it for over 20 years is simply outdated by newer far more efficient streaming IP based video service.

Blockbuster looks to be in a restructuring phase and appears to be willing to continue as a going business.  Without a doubt Blockbuster has a long road ahead of it before it is as streamlined as Netflix, time will tell though if the company will indeed shed enough employees to be on par with Netflix.

Billionaire Carl Icahn a long time Blockbuster shareholder has purchased Blockbuster debt to help influence the bankruptcy process.  I wouldn’t be surprised to see something creative come out of this bankruptcy with Carl Icahn in the mix.  Currently he has been chasing control of Lions Gate Films, and holds a lot of MGM debt again able to influence the bankruptcy of MGM films.  This is an interesting time in the entertainment industries and it looks like Mr. Icahn might be headed for a triple play of sorts.

Did you work for Blockbuster?  We’d love to hear your craziest customer stories, or even how the bankruptcy was handled at your store.