Revisiting the Death of Blockbuster Video

About 7 years ago now we talked about why the collapse of Blockbuster Video was a “big deal”.  Now more recently someone has visualized what that death of a formerly nationally scalled store concept looked like, the growth, all the way through the death.

Between 1985 and 2010, Blockbuster Video opened thousands of stores across the US. The video map shows the locations of US Blockbuster Video stores over time. The store counts also include Alaska and Hawaii which aren’t shown on the map.

Again as the general tide changes and once great bricks and mortar store concepts fail before our very eyes the collapse of relatively entry level, and semi-flexible jobs disappear with them. 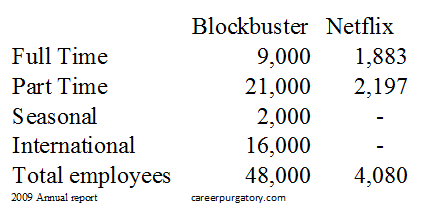 In other words Blockbuster employed nearly 12 times as many employees as Netflix at the beginning of 2010.

So sure you might be wondering why do we care again about Blockbuster Video’s failure, since we all love Netflix, Hulu, Amazon Prime Video, and Disney+ better anyways? Well the same permanent job losses from brick and mortar retail is playing out before our eyes yet again. We have J.C. Penney, New York & Co, Pier 1, J Crew, among dozens of other former bellwether brand names, all in various forms of bankruptcy in 2020, and all of them have too many physical stores. With the loss of these physical stores will be the loss of tens of thousands of jobs permanently.

Those jobs are not coming back, and even a successful pivot to a wholly online presence will require thousands fewer jobs as a warehouse can be highly automated and requires far less customer service help.

The canary in the coal mine may have been the failure and subsequent liquidation of the ever popular yet bankrupt Toys R’ Us. Before the economy soured in 2020 the chain liquidated from unbending debt holders. The chain has been mounting a small come back in 2020, but we strongly suspect it will never hit the prior peak of thousands of stores that it did in its former life.

So remember to keep looking for employment that is hard, maybe even impossible to automate away, or offshore. If you are reading this and have lost you job, check out our guide to getting back on your feet. Also check out our unemployment insurance articles which have some tips for navigating often complex state systems.